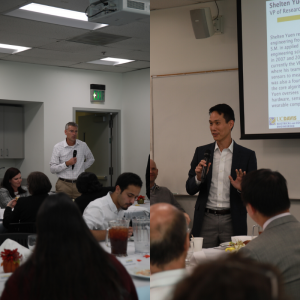 The ECE department would like to congratulate Michael Hurlston and Shelten Yuen for being recognized as the 2019 Distinguished Engineering Alumni Recipients. This award is the highest recognition presented by the College of Engineering to Alumni whose outstanding achievements and contributions honor the College.

Mike Hurlston received his B.S and M.S. in electrical engineering at UC Davis in addition to a M.B.A from the UC Davis Graduate School of Management (GSM). He has led a successful career as an electrical engineer and as a business leader. He served as general manager of the Mobile Connectivity Products/Wireless Communications and  Connectivity Division at Broadcom Limited, and Vice President at Finisar (an optical communications component manufacturer).  Hurlston is currently the CEO of Synaptics, the leading developer of human interface solutions, bringing innovative and intuitive user experiences to intelligent devices. Since graduating, Hurlston continues to be involved with UC Davis both philanthropically and by volunteering with the two colleges he spent his time in. He and his wife Joelle donated 1.6 million to establish an endowed chair position that rotates between the three colleges they were involved in. Their gift enables the school to support faculty and in turn the students.  He is currently a member of the GSM’s Dean’s Advisory Council and a member of the College of Engineering’s Dean’s Executive Committee, which works closely with staff and faculty to assist the College through advocacy, prospective donor identification and cultivation, and personal philanthropy. A useful skill he learned at UC Davis was team collaboration. “The engineering problem sets were always very difficult and without collaborating, they would be either too time consuming or impossible to answer. Collaboration was the only way to stay sane and it turns out that is the way industry works as well!” said Hurlston.*

Shelton Yuen received his B.S. in electrical engineering from UC Davis in 2001 and his M.S. in electrical engineering design from Harvard University in 2007. He is currently the VP of Research at Fitbit Inc. where his team built one of the first optical sensors to measure pulse. He was also a founding engineer and developed the core algorithms in the Fitbit trackers. Yuen oversees development in new hardware, sensors, and algorithms in wearable computing. He enjoys trying to understand a problem from different angles, especially because real-world problems are complicated and engineering solutions have to take in many considerations. “As an engineer, it is enticing to analyze, optimize, and perfect a solution to the problem that is right in front of you. However, I find it useful to instead pause and figure out what problems will have the most impact,” said Yuen. *

Hurlston and Yuen were honored for their achievements at the College of Engineering’s Alumni Celebration on Nov 22. They as well as other accomplished UC Davis COE alumni gathered for a dinner along with family and friends and reconnected with the department. We are privileged to host such accomplished individuals and exceedingly proud to call them UC Davis alumni. To our alumni, ECE anticipates you reaching greater heights in the future!

*The above interview and biography can be found here: https://engineering.ucdavis.edu/blog/2019-distinguished-engineering-alumni-recipients/